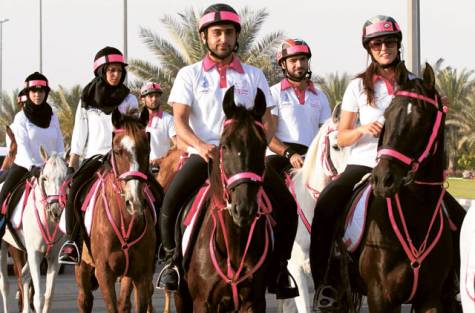 SAHARA Communications, subsidiary of the SAHARA Group, has successfully concluded its comprehensive media coverage for the Pink Caravan Campaign, which culminated its activities on 14th of April 2012.

The 10-day horseback journey aimed to spread awareness of the importance of breast cancer early detection tests across the emirates of the UAE. The campaign has received immense official and public support.

SAHARA effectively create the public awareness plans  and objectives of the Pink Caravan and highlighted its important role in disseminating the culture of early detection in society. The comprehensive media campaign that was able to build bridges of communication between the Pink Caravan and the community at large, providing news updates in audio, video and print media as well as in social media such as Twitter, Facebook and Youtube. These efforts were instrumental in raising public awareness and increasing the number of applicants for tests in the different emirates of the UAE.

SAHARA  has managed to mobilize support from government and private organizations, as well as prominent figures from the medical, intellectual, cultural, sport, art and media communities who helped attract people from different backgrounds. The firm conducted direct interviews with applicants and presented the results of tests professionally through its experienced teams who worked around the clock during the 10 day campaign. The Pink Caravan completed 3500 free tests for applicants in the seven emirates of the UAE.

Speaking on the occasion, Dr Ahmed Samerai, President of SAHARA Communications, said: “The role of media in serving the humanitarian goals is derived from the UAE’s human approach at regional and international levels. Evaluating credibility is based on the efforts you exert to achieve the goals that support the safety and stability of society and help position the country at the top of the ladder of civilization”.

“We are thrilled with such comprehensive support from the community of the Pink Caravan’s activities as well as with the generous support and patronage and warm welcome at all levels. This helped attract large numbers of applicants for breast cancer early detection screenings. We are confident that the best is yet to come. The Pink Caravan’s reputation has crossed the borders”

HE Ameera Bin Karam, Founding Member and President of the Board of Trustees of Friends of Cancer Patients (FOCP), said: “The extremely positive response shown by citizens and expatriates has stimulated us to continue our efforts in providing tests to the largest number of people possible, all over the country. I would like to pay tribute to our media partners, particularly Sahara, for their significant contribution during the Pink Caravan’s activities in the country, and their outstanding efforts in promoting our objectives and helping increase awareness on the important role the Pink Caravan plays.”

The list of riders who took part in the breast cancer early detection medical team was comprised of over 180 riders, among them a number of prominent figures from government, cultural, art, and sport communities. Sharjah came first with regards to the number of clinics followed by Dubai, with 12 and 9 clinics respectively. Ajman was third with 7 clinics. Abu Dhabi, Al Ain and Ras Al Khaimah had 6 clinics each, while Fujairah and Umm Al Quawain received 3 and 2 clinics, respectively.

It is Worth mentioning  that the Pink Caravan’s medical cadre had completed breast cancer early detection tests for 10025 applicants in 135 clinics across the UAE by end of October 2011. The number of women tested was double compared to the number of men, with 6045 women versus 3071 men. The age group between 20 and 40 years formed the majority of applicants with 7864 applicants, more than three times the applicant than from other age groups.

Back to top
Page load link